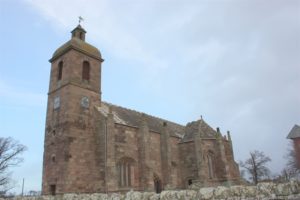 Erected by AGNES TROTTER in loving memory of her husband JOHN  TROTTER  who died at Horndean 22nd March 1802 aged 41 years.

Also JANE daughter of the above who died in London June 5th 1947 aaged 93 years.

And their forth daughter ADA MARY LAUDER who died 9th Feb 1985 aged 77 years.

Also the above ELIZA WATSON who died at East Ord ? October 1963.

In loving rememberance of ISABELLA TROTTER  the beloved wife of JOHN SHIEL who died at Berwick June 6th 18?? aged ?8 years.

The rest is unreadable.

In loving memory of ? SMITH who died ??

In loving rememberance of AGNES second daughter of WILLIAM and ELIZABETH CAIRNS who died at Loanhead May 17th 1879 aged 25 years.

Also AGNES ELIZABETH and THOMAS who died in infancy

In Loving memory of CHRISTINA ROBSON the beloved wife of JAMES CAIRNS who died at Horndean June 11th 1885 aged 76 years.

Also the above JAMES CAIRNS who died at Partick March 13th 1889 aged 80 years.

Erected by DAVID EWART in memory of his son who died at Horndean Dec 12th 1866 aged 6 years.

Needs a clean but