James Lawrence was the record-breaking Newcastle United footballer holding the record of played in 495 games, winning 3 league titles and an FA Cup winner’s medal. He was a goalkeeper. He played for NUFC between 1904 and 1922.  Born in Partick, Glasgow, his career ‘took in’ Partick Athletic, Glasgow Perthshire during which period he occasionally assisted Hibernian, and Newcastle United. After retiring from Newcastle, in 1922 he became the South Shields manager. Sadly he was dismissed in January 1923 but soon became the manager of Preston. In 1925 he became a coach in Karlsruhe, Germany, and later returning to Britain. to become the Stranraer chairman in 1933 ‘to his demise’. Full football honours included 1 Scotland cap in 1911, Football League champion in 1905, 1907 and 1909, FA Cup Winner 1910 and FA Cup Finalist in 1905, 1906, 1908 and 1911. An intellectual joker off the field, James was at the heart of United’s great team spirit. He was a fine and consistent goalkeeper although sometimes accused of disliking high crosses. He was appointed Chairman of the Players’ Union in September 1922 and he discovered the great Alec James when in charge at Preston. He died in November 1934 aged 49 years. As yet, we don’t know where he is buried.

There was great interest in September 1913 in the trial of Dr. Thomas Murdoch Campbell of 9 Winston Street, Parkhead, Glasgow who appeared before Lord Johnston in the High Court of Judiciary in Edinburgh on a charge of having caused a woman’s death by performing an illegal operation. Before the court opened, a large crowd had gathered in Parliament Square to witness the arrival of Dr. Campbell from prison.

The doctor was accused with having, on 22nd or 23rd April 1913, used an instrument  or instruments, in the body of Barbara Murray or Lawrence, wife of and residing with, James Lawrence, 4 The Terrace, Ovingham, Northumberland, she being then pregnant.  In carrying out an abortion, Dr. Campbell, in using instruments, was said to have caused the young lady’s death and was charged with her murder.

It was remembered that a sensation was created at Coldstream (Lennel Kirkyard) by the exhumation of Mrs Lawrence’s body where she was buried. Her parents belonged to Coldstream.  Additional interest was raised by the fact that Jimmy Lawrence was a famous footballer. Dr. Campbell was married to Barbara Murray’s sister. The accused pleaded not guilty.

After the jury had been empanelled, His Lordship said he would remind all those in the court that it was not customary to close the court in cases of this kind but he would recommend all women who were present leave the court. The few ladies present did in fact retire.

The first witness was James Lawrence (30) who said he married the deceased on 24th February 1913 in a registrar’s office in Newcastle–upon-Tyne. He had known her some considerable time. At that date, his wife’s parents did not know about the marriage but he understood they became aware of the marriage a few weeks later. Eventually the couple had moved to live at Ovingham.
On 15th April, Barbara Lawrence left to visit her sister, Mrs Campbell and her husband saw her off in relatively good health. She told her husband that she was pregnant and was going to her sister because Dr. Campbell had been drinking excessively. Barbara returned the next day to Newcastle.

She went to Glasgow again on 22nd April and Mr. Lawrence was to follow her up the next day, on the train. On arriving in Glasgow, Mr. Lawrence was met by Dr. and Mrs Campbell who explained that Barbara was in a nursing home very ill, having gone through an important operation. She was holding her own but still seriously ill. Later, Barbara was to die.

Accounts indicate that Barbara died as a result of hemorrhaging caused by a rare form of ‘ectopic pregnancy’. Expert medical witnesses revealed that Dr. Campbell had followed procedures expected of a surgeon but had probably breached the womb wall. He was highly regarded as a surgeon and had served in the Boer War and was later to be made a Freeman of Glasgow.

Alex George Gray, a member of the firm J. and A. Gray, Undertakers, was present at the interment of Barbara Lawrence, he knew her personally, and this took place on 28th April 1913. He had also attended on Friday 6th June 1913 the exhumation of the body, where he witnessed the body along with William Renton, Gravedigger. The coffin was placed on a trestle and medical men examined the body.

Dr. Campbell was eventually cleared of the charge of murder of his sister-in-law, Barbara Lawrence, yet it was likely that in following accepted procedure he had caused the rupture to her womb. However, Dr. Campbell’s drinking habits, Barbara Lawrence’s weak constitution and the medical profession closing ranks appeared to contribute to the inevitable innuendo in this case..

On the gravestone  Barbara Murray's sister  Mary Ann the wife of Dr. Campbell is named , have you any
background to that ? Perhaps a little unusual unless she was divorced or widowed for her to buried there. 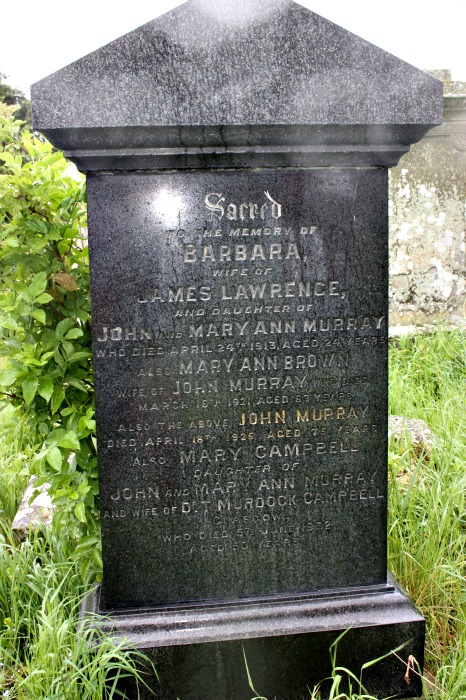