Flying Officer Ronald Sinclair Orr,  Royal Air Force Volunteer Reserve. He was a Navigator with 248 Squadron and died on 21st April 1944, aged 23. He was the son of Daniel and Mary Greenshields Orr of Coldstream and the brother of Danny who died in Edinburgh aged 101 in 2011. His sister Madge also lived in Coldstream and was for many years a faithful member of the Parish Church choir.He is buried in Lennel Churchyard. His Bristol Beaufighter was hit on an Anti-Shipping strike in the Bay of Biscay and crash landed in the English Channel. The pilot was lost and although Ronald made it into a dingy he died from hypothermia before he could be picked up by an air sea rescue launch. Before the war he had worked for a Bank and was a keen member of the 1st Coldstream Boys Brigade Company.
Search 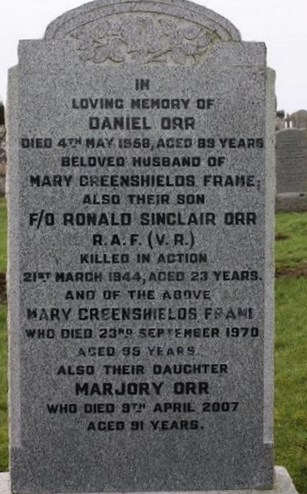 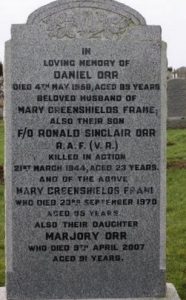