In Loving Remembrance of GEORGE NEVINS, who died at Ancroft Greenses, 27th Sep. 1887 aged 64 years, the beloved husband of JANE NEVINS.  Also of the above JANE NEVINS who died at Lookout, 14th Oct. 1925 aged 90 years.

My name is Anne Knox nee Nevins, I was born in Alnwick Northumberland in 1960. I knew next to nothing about my family history other than about relatives who were still alive.
One day my father Richard Nevins was clearing cupboards and he gave me an old photo album and an old collection of postcards, he said he thought they had come from George Nevins, my grandfather’s house in Lowick after he died but he did not know who had collected them.
I proceeded to take all the photos and postcards out of the albums and read them to see if I could make any sense of them, a recurring name on the postcards was Isabella Hardy who came from the Ford  ,Branxton area in the late 1800 early 1900s, they were sent to her by her parents, brother and sister and friends,  they were also sent by her to her family to give short messages,’such as see you on Saturday’,’happy birthday’,’thank you for coming to visit’.
Then the mystery was solved,one of the cards was addressed to Mrs Isabella Nevins asking how she and baby George were, it turned out she was my Great Grandmother and baby George was my Grandfather.
Isabella Hardy had married George Hugh Nevins and had George and then later
William.
Later talking to my aunt Iza she said ,yes that is my grandmother I am named after, I had not realized that my aunts full name was Isabella.
That is what started me off on the family history search.

Finding out where relatives are buried is quite difficult so searching graveyards is usually the best way.
I knew that my grandfather George Nevins was buried at Tweedmouth and by accident I found that the church in Ford village had already transcribed their graves and that is where I found my great grandfather George Hugh Nevins and Isabella (Hardy) Nevins.
I then searched Cornhill and found three gravestones, (if there are any more I would love to know about them)

One grave is my great,  great grandfather  George Nevins , his wife Jane (Robson)Nevins . They married on 10 May 1856 at Coldstream in a cross border marriage.
They had nine children one of which was my great grandfather George Hugh Nevins , he married Isabella Hardy and they are buried at Ford.

The second grave that I found was my great, great grand uncle James Nevins and his wife Margaret (Davidson)Nevins and their daughter Mary aged 13.
He was G.G. grandfather George’s brother.

The third grave was my Great,  great, great grand uncle John ,his wife Jane (Gibson)Nevins with all their children ,Isabella aged 51 ,George who died at birth,a second son called George aged 25,Thomas aged 72 and his wife Janet (Sprott)aged 67.Thomas and Janet had no children therefore this line of the family ended.
John was my great,  great, great grandfather James’s brother.

My GGG grandfather James appears to be one of eight children born to George Nevins and Ann (Ferguson) Nevins married at Branxton 28 April 1796.

From all my research I have discovered that all the family members were employed in one way or another as agricultural workers , hinds ,  farmers , gamekeepers and millers, also they did not move very far from their birthplaces of Ford , Branxton , Cornhill,  Crookham , Lowick  ,Berwick. 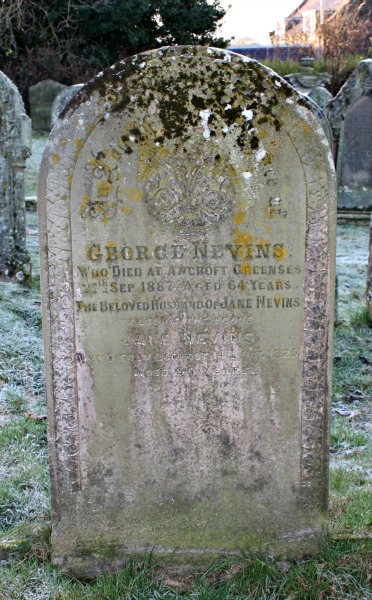 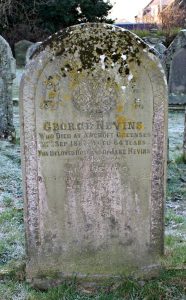 Search the Section A - Row 10 directory: