Repair, Conservation and Interpretation of the Medieval Lennel Kirk 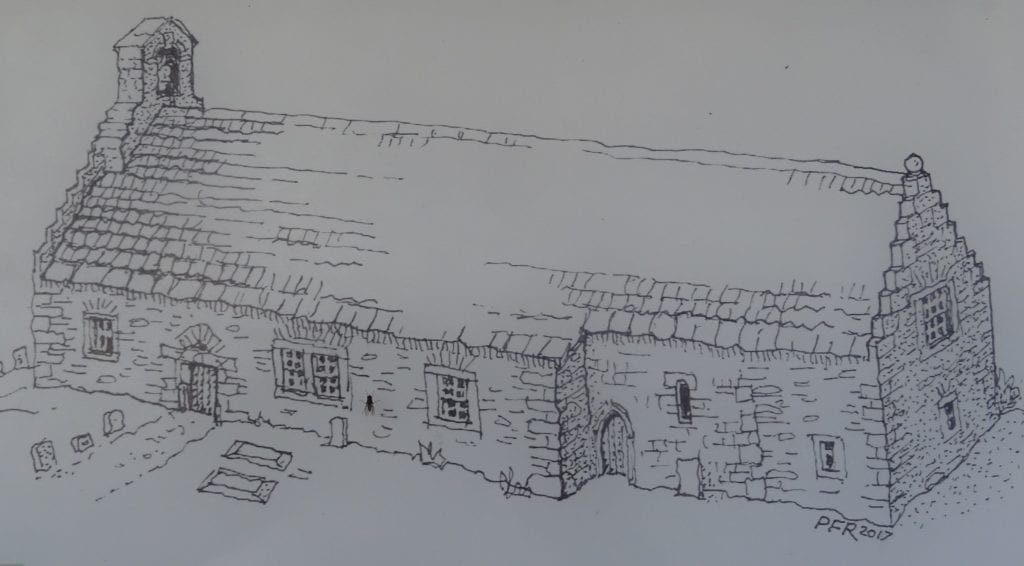 The society has been a great supporter and probably the catalyst for the project mentioned in the title. The society was responsible for all the transcribing and photographing of kirk yard headstones into another part of this website. This was an enormous task followed by finding out more about the people buried there, which is ongoing. During this lengthy exercise, led by Trevor Swan, it became clear that the ruinous Lennel kirk was an eyesore and potentially dangerous. The community interest company is abbreviated as CHL and Trevor became a director as well as Gerald Tait and Will Murray. All three are still members of the history society.

2.  Has the project been successful?

The site is now safe, the walls and their stonework are conserved, the kirk has an owner (us, CHL) and a future, medieval Norman stonework has been confirmed, romanesque mortar is in some walls, memorials of eminent people are stabilised and there are post-reformation memorials. Previously we knew from a landslide and archaeological review by GUARD Archaeology in 2011 that burials in the old kirkyard date back to the late 15th century. We now know more about the era of ‘body-snatching’ and the history of Lennel village, the Lendon Hand Bel, and the context of the 12th century church in the Catholic Order and its relations with Coldstream Priory, other abbeys, nunneries and churches.

We therefore think that this project has been a success, conserving a listed B building and being the catalyst for better maintenance of the old kirkyard. For example, the old kirkyard grass is only cut once a year by the Council and are developing a plan to improve this situation and help the Council.

3. We are most grateful to our grant funders and donors

The project has been funded by:-

Donations from Douglas and Angus Estates, Lennel Estates, this History Society and the Flodden 1513 Club.

The Headley Trust donation was not required to directly fund the project but the trust is happy that it’s £5k can be used by the CHL for ongoing maintenance of the site etc.

NB: A few supporters have asked how the SLCF works. So, here is an outline:-

The money is that portion of Landfill Tax that Landfill Operators (SBC in this case) can donate to environmental projects in lieu of handing it over to Revenue Scotland.  This is carried out under the Scottish Landfill Communities Fund (SLCF) scheme but must be handled by an Approved Body (BCCF Environmental) that actually does all the work and the whole is overseen by SEPA who regulate the scheme.  SBC only gets 90% credit for its donation so makes up the balance from its own resources.  In essence, Revenue Scotland contributes 90% and SBC 10% of the awards received.

Gerald Tait, Trevor Swan and Will Murray, the Directors of CHL, are delighted with the help and support of others on the project team, Caroline Douglas-Home, John Elliot and Leah Tait. Without their support, there would have been problems and delays.

Enormous thanks are also extended the archaeology and research volunteers, too many to mention here.

4.  A kirk yard tells the story of a community

It has become abundantly clear that a kirk yard and local kirk tell the history of a local community. Research is ongoing into the people buried in the old Lennel kirk yard and in the headstone transcriptions part of this website, you will find ongoing details.

None in particular other than the next coffee morning in January 2019 to help pay for insurance and bank charges. However, the delivery of 2 information booklets is ongoing.

On 16th October 2017, CHL received this award, after stiff competition, in Category D (Best Repair, Conservation and Interpretation of a Historic Building).

HEALTH AND SAFETY WARNING: DO NOT INTERFERE WITH THE KIRK WALLS OR NEARBY HEADSTONES