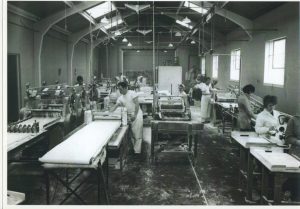 Forsyth and the JUS-ROL legend   Tom Forsyth’s family had a bakery business in Innerleithen and Tom along with his brothers all joined the family business on leaving school. By the 1930’s Tom had purchased his own bakery business in Coldstream at 44 High Street. The bakery prospered under his ownership and an outside catering …

Forsyth and the JUS-ROL legend

Tom Forsyth’s family had a bakery business in Innerleithen and Tom along with his brothers all joined the family business on leaving school. By the 1930’s Tom had purchased his own bakery business in Coldstream at 44 High Street. The bakery prospered under his ownership and an outside catering business developed which was also very successful.

It was here that Tom found there was a demand for frozen Puff Pastry and this was the start of ‘Jus Rol’ as we know it today. Ingredients became more readily available after the war, and the amount sold to the local people made him realize that he could sell the product further a field.

Tom was a true entrepreneur and set about raising the initial capital of £3,500 (the maximum he could raise). The certificate of Incorporation of Jus-Rol as a limited company was signed on November 26th 1954. A property that had been used first as the Bible Factory made famous by Thomson and later by Coldstream Brewery was taken over and converted into a factory making pastry. Initial sales were by van to local grocers then venturing into Edinburgh.
Tom Forsyth was ahead of his time and man of vision He had developed a product that was clearly a winner but in the 1950’s freezers were out of reach of the average home. This was overcome in 1957 when Lovell and Christmas were appointed as primary wholesalers in England. They had depots in Stockport, Smithfield and Bristol, which was enough to set up the national distribution they needed.

JUS-ROL
How did JUS-ROL receive its name?  Ladies who worked at the bakery were encouraged to take home cuttings from the uncooked  pastry products. When asked what they did with it they replied “we just roll it out and that was how the name was born. In registering the company “just roll” was considered to descriptive a name so it was shortened to “JUS-ROL”

There was sadness and gloom in Coldstream when JUS-ROL announced their intention to move to Berwick. Mr Tom Forsyth wanted to build a factory here in Coldstream but planning permission to build an industrial unit was turned down. Woodlands Park now stands where the factory was proposed. At this time Tom was a town councilor. So it was with regret that the JUS-ROL business moved to Berwick. Berwick was delighted, they landed the big one- but how big even they did not realize at the time.

Hazel Tait showing off the pastry in the Coldstream Factory

The day that Joyce Davidson arrived at the Coldstream factory  in the Market Square looking like a snowman is etched in the memory of Billy Sim. “She was covered in snow after cycling from Kimmerston which is at the other side of Millfield. In arriving five minutes late Joyce Purves as she was then, also a great time keeper, was asked where have you been what kept you.
They were only joking of course, because they all appreciated it was a great effort just to get there. Joyce one of the several girls who cycled across the border each day, had never thought of turning back but battled on to work in the teeth of a blizzard.

Oh how things have changed JUS-ROL is now one of the largest employers in Berwick on Tweed. To think that it could have been in Coldstream had the planners given permission.

Now it has even gone from Berwick away overseas. Rest in peace Tom Forsyth.