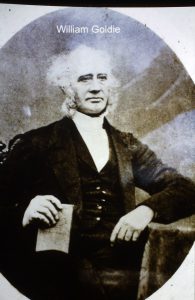 Today Trafalgar House is somewhat of an embarrassment and has fallen into considerable decay having been boarded up and moth-balled some seven years ago. It has, however, undoubtedly had its good times and the main story starts with the local Minister. Between the years 1830-1859, the Parish Church had a colourful Minister by the name of Thomas Smith Goldie. He apparently was very forthright and at the very outset of his Ministry he refused to live in the Manse provided for him, asserting that it was uninhabitable and he demanded from the heritors that a new Manse be built. The ‘offending’ Manse was the one in Duns Road, in an area where the Housing Association flats are today. Prior to the Duns Road Manse, the Manse had been at Lennel, halfway down the pathway leading to the Tweed. When the heritors found themselves, much to their annoyance, compelled to build a new Manse for the outspoken Reverend, they threatened to build a Manse so large, the Reverend would not be able to furnish it. Fortunately this threat was not carried out. It was built in 1833-34 as a Manse for the Established (now the Parish) Church and according to a later Minister, the Reverend William Browne, ‘that in respect of fineness, beauty of situation, elegance of structure, perfect symmetry, central chimneys, protruding eaves and its pillared entrance, the Manse of Coldstream was second to none’. He thought that the architect who designed it must have had a soul, and was no ordinary architect as ‘its lofty rooms and delicate cornices and spacious windows revealed a taste which was not common in the early part of the nineteenth century, certainly not common in church architecture’.
The Reverend Goldie thought it was a lovely building too (otherwise he may have left!) and he was particularly proud of the magnificent chestnut trees in front of the Manse, and the avenue leading up to it. It was the proud boast of the Reverend that he had carried these trees as saplings on his back, walking all the way from Haddington, and he planted them himself in the Manse grounds (later to be referred to as the ‘Glenesk’). Sadly, these trees are no longer there, making way for a garage, Guard’s Road and progress. In 1862 the Manse was listed on the town map as number 42 High Street, it had surrounding outbuildings, which aren’t there now and it had a field in front of it, which would be the Minister’s Glebe, where he kept his horse(s). It boasted a lengthy drive leading up to it, which would be roughly where Guard’s Road is now. Reverend Browne was the last Minister to use the Manse and it was subsequently sold as a private house and its name changed to ‘Trafalgar House’. Much later it was purchased by the Berwickshire County Council and made into a very valued and welcoming Residential Home for the Elderly. This was in 1969 when the Council modified it into a 25-bed home. ‘Traffy’ House existed as a happy home for the elderly until the Regional politicians (of the West and Central parts of the Borders) got their hands on it in the late 1990s. Sadly, they decided it was superfluous to requirements and it was closed. Right up to 2010, Coldstreamers have had high hopes for it to be put to constructive use, but it has deteriorated into a moth-balled shell, the bane of the local authorities and townsfolk alike. Maybe the Reverend Thomas Smith Goldie would have something strong to say about it now!

The Reverend Goldie is also mentioned in two significant moments in Coldstream history. The first is in relation to Thomas Rogers:-

While on the subject of the law, the case of Thomas Rogers is worth a mention, in the context of the Reverend Thomas Smith Goldie, Coldstream Parish Minister between 1830 and 1859. The Reverend was a colourful character, a wonderful orator and in a sermon preached to parishioners, he alluded to the sad case of Thomas Rogers. Thomas Rogers was a 20 year old carter of Coldstream who was said to be good tempered, even natured and a church-goer. In August 1831, while delivering gas pipes to Kelso he appeared to be in an excited state from early in the day. Before returning home, he visited a public house in Kelso and became very much under the influence of drink. Just a mile from Kelso, he stopped at a place beside the Hendersyde Lodge. Some Irish labourers were crossing the river via the island to avoid having to pay a toll at the Kelso bridge. They were proceeding to Northumberland, looking for work. Thomas Rogers jumped off his cart and followed them, all the time trying to pick a quarrel. He singled out one, Neil McKillop, who by then had crossed to the island, and Rogers caught up with him. Picking up a heavy stick, Rogers clubbed McKillop to death. Rogers was arrested, tried at the High Court at Jedburgh, and found guilty of ‘wilful murder’ by a jury which deliberated for only 20 minutes. Full of compassion, the Reverend Goldie visited Rogers regularly in Jedburgh jail and he conducted the service before his execution, witnessed by several thousand spectators.
The event caused a great sensation and the Reverend, in his next sermon in Coldstream, siezed the opportunity to drive home the lessons of self-control and temperance. He chose as his text ‘Let him that thinketh he standeth, take heed lest he fall’. He faced his congregation fearlessly. The sermon created such an impression and was so appreciated that he was prevailed upon, after much reluctance, to have it printed. Trusting, he said in the preface to it, that he would ‘receive credit for the purity of his motives’. His dedication was given to the Heritor of Lennel, the Earl of Haddington. The Reverend had been a spendthrift during his days, spending great sums on hunting and horses, and living a lifestyle well above his means. Whilst contributing greatly to the Parish, and the spiritual well-being of his brethren, the Reverend’s message ‘Let him that thinketh he standeth take heed, lest he fall’ appears to be appropriate to the Reverend’s demise. He died in 1859, shortly after becoming bankrupt.

Will Dixon – shoemaker, who is thought to have always commenced services with, ‘What’s yer name mon, and where d’ye come frae?’ He took up the occupation in 1842 when his wife died, leaving him with three young children to care for. He raised income by carrying out non-church weddings and he kept records, those from 1844 to 1857 are still in existence today. During these thirteen years, it is said that he conducted one thousand, four hundred and forty six marriages, not a bad average rate of around two per week. Coupled with the number counts of other priests, this was quite an industry. Thomas Smith Goldie, Minister of the Parish Church (1830-1859), tried to stop Dickson competing with him and took him as far as the Edinburgh court, but the charge was dismissed. On returning to Coldstream, Dickson was carried shoulder-high along the High Street. Presumably, the Reverend Goldie wasn’t, and he later went on to become a bankrupt. As a result, Dickson left the congregation of the Parish Church and joined the West Church, becoming Beadle after retiring from his duties conducting irregular weddings. He died in 1862.