Home » Cocksedge from Coldstream my story

Cocksedge from Coldstream my story 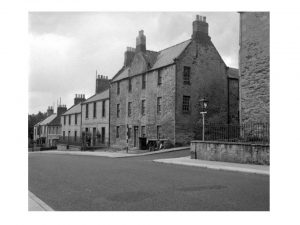 My Granny, Margaret Fulton Brown, was born in a small, single story, terracotta tile and tin roofed cottage, at Donaldson’s Lodge, Cornhill-On-Tweed, Northumberland. Her mother and father Andrew Brown (1862 – 1935) and Margaret Alice Shiel (1877 – 1952) had been married in 1907  and had moved out of the house where Andrew Brown lived with his mother, at the farm at Oxendean Burn, which was just before Donaldson’s Lodge from the Cornhill side. Granny’s brother Alexander Shiel Brown had already been born during 1908 at this cottage. Margaret Alice Brown had met Andrew Brown after first being employed by him as his housekeeper after his mother had died in 1906.

During 1910 the new family moved out of Donaldsons’ Lodge and as her mother was pregnant with Bill (William Brown) they needed more space so they moved to The Boathouse at Wark-On-Tweed. There was an ideal opportunity for employment there as the Boatman operating the ferry between Wark and Fireburn Mill on the Scottish side of the Tweed. This employment would be an ideal supplement to his salmon Fishing on the Chillingham Estate, his family on the Fulton side had fished Salmon on the Tweed for at least the last 100 years. My Granny remembers going to sunday School at the tin shed in Wark, the tin shed is still there (1997). Her mother who was often poorly, required help in the house, so they employed Mary Ford (later Brown) to help with the children. Mary was to be a family friend all their lives and in later years was refered to as Mrs. Brown by Granny and her brothers and sisters. She had two daughters Lena & xxx. My mother remmeders Mrs. Brown being an early adopter of the television and she would invite my Granny over to watch the Sunday evening play on TV.

When my Granny was 10 years old in 1919 the whole family now consisting of mum, Dad and children; Alec, Meg, Bill, Drew, Bella and Bert and their young helper, Mary Ford, moved to Coldstream on the Scots side of the Tweed, to No.2 The Dove Cote. This was the middle cottage of a crenelated house reputed to be part of the long gone Cistercian Monestry sited in Coldstream over looking the Tweed. My Granny then attenended the school in Coldstream, the same school where my mother and me and my brother attended too.

She left school at 14 in 1923 and intitaily helped in the family home. Her mother suffered a heart condition most of her life and by now her father was showing signs of heart trouble and was strugging to carry out physical work on occasions. By 1924/5 Andrew Brown was too ill to work at all, and her brother Bill who was then 14 had to step in to try and bring some money into the house. Bill consequently went to work in the Post Office as a Telegraph Boy, and started a long career in the Post Office that was only cut short by his own premature ill health.

At the age of 17 in 1926 my Granny went to work as a nursery maid for Lord Joycey on his estate at Etal. She intially stayed with her Uncle Tom (Wallace) and Aunt Nell (Ellen Shiel). Long before she lived with her Aunt and Uncle she recalls her maternal Grandfather, William Shiel living there with Uncle Tom & Nell in Etal. He would walk the 8 miles from Etal to Wark At the end of the journey she would watch as he pulled out a clean white handkerchief and dust off his big heavy boots before coming in to the house. In his last few years unfortunately,  he was wheelchair bound, he died in 1923. After three years in Lord Joycey’s employ, during 1929,  she left to work at Marchment house as Under Nanny. This was the position she had been promoted too at Etal.

Her time at Marchment ended during 1931 and she went to work for colonel and Mrs. McCreery until 1935. Two of the children contacted Chicken Pox and so she had to leave the house.

She Met Arthur Edward (Ted) Cocksedge and they were married in 1939. They lived in Caversham near Reading.

When war broke out she joined the Womans Aucilliary Army Corps (W.A.A.C) as a shipping clerk of the Pay Core. My Uncle, Brian Cocksedge was born in 1940. She became ill after the childbirth and had a minor storke. During the preganancy of my mother, Kay cocksedge, Meg was persuaded by her mother to come home to Coldstream. This was against her husbands judgement. This was not conjunctive to good marital relations and was the beginning of a worsening relationship.

After the war Ted Cocksedge was de-mobbed and moved up to Coldstream.He worked as a Furniture Restorer and Antique Dealer. He had contract with Hirsel house and Lennel House to repair and restore antique furniture.

In 1951 the family now, with just my granny’s mother (Margaret Alice), my granny, her husband Ted, her mother, and their two children, Brian and Kay (my mother) moved to 38 high Street, Coldstream. Granny’s mother, Margaret Alice shiel, was a real matriarch, an opinionated lady and did not get along with Ted’s employment and rather thought it was not ‘proper mens work’ This meant that when Ted opened an Antique shop next to the house at 38 High Street he could not get his wife to stand in the shop when he was buying stock or attending his two valuable furniture contracts at Lennel House and The Hirsel, as her mother would drag her away. This meant the shop was unattended. In the worst case items of value were sold at a value much lower than their actual worth. Ted Cocksedge brought in a good wage for his activities and this jeopardised the income of the family. Ted Cocksedge was affected by all this and he took to long periods of absence. In fact he had started a relationship with Ada Murless and they had a child, Maurine, in 1950.

Ted drifted in and out of his families life and eventually just did not come back. This was clearly devastating for the family and particular the two children. Ted settled in Dorset near Bridgeport.

My Granny, M.F. Cocksedge (Brown) in 1964 married a retired Gillie /  farmer from Cornhill William Johnston, they moved into his home, The Buckie House, Cornhill-On-Tweed. I can remember William Johnston at some time after they moved back to 38 High Street. He walked with sticks as his hips required replacement. He used to sit on a large box in the kitchen next to the Rayburn. I can also remember him washing spuds under the outside tap outside the back door. He had an allotment in one of the gardens across the road from 38 High Street. I went with him on occasions to gather up some vegetables for the table. It was very well kept and full of produce, it was from this that I started to get my early love of growing things. I remember him being a very kind, friendly man, I remember sitting on his knee. I do remember him offering his watch and chain to me when he passed on, this never happened. William Johnston died in 1971 of pneumonia. William was a life long Methodist and was involved with the chapel at Donaldson’s Lodge, as such he was completely teetotal. My mother recounts a time when he had taken to his bed  in the final days the District Nurse virtually force feeding him Guinness, in the guise of medicinal purposes, which would have been completely against his wishes