(Large monument previously fallen on its face. Efforts were successfully made to fund a reinstatement and the present photograph is the first phase of the repair. Robertson Memorials of Kelso have said that they are going to revisit the repair in the finer weather of the spring. The Society is very proud of this reinstatement and thanks everyone for their help and contributions)

The mortal remains of AGNES GRIEVE aged 2. SARAH ELIZABETH aged 2. And MARGARET aged 12 years. The beloved children  AGNES of PURVES  Lennel Hill are here deposited in humble submission to the will of Him who said suffer little children to come unto me. JAMES PURVES  the affectionate and beloved husband and father who departed this life at Ford on the 11th December 1840 to the inexpressible grief of a sorrowing wife and family aged 49 years.

Also AGNES CLAY wife of JAMES PURVES who died at Musselburgh on the 11th June 1860 aged 68 years beloved and dearly regretted by her surviving family. MARGARET MORRISON the much loved child of PETER WM PURVES and grand daughter of the said JAMES PURVES aged 10 months.

(On rear) Also JAMES CHARLES 3rd son of JAMES PURVES who was wounded in the Charge of the Light Brigade at Balaclava and died in Scutari in Turkey 2 January 1855 aged 23 years.

This was the only major war fought by Britain between the Battle of Waterloo in June 1815 and the outbreak of the Boer War in 1899.  Whilst it is apparent from a study of the local newspapers this war seemed to have little impact on the local population, for one Coldstream man at least this war was to give him a permanent place in one of the most famous actions in military history.
In October 1854, the British together with their French and Sardinian allies were besieging the Russians in the naval fortress of Sevastopol in the Crimean Peninsula.  The siege works were not complete and the Russians were able to make several ‘sorties’ against their besiegers.  On 25th October such a ‘sortie’ took place. Firstly the Russian cavalry attacked towards the port of Balaclava in an attempt to separate the besiegers from their supplies.  The initial attack was repelled by the 93rd Highlanders (The Thin Red Line).  Secondly, the disordered Russians were dispersed by an uphill charge by the British Heavy Cavalry under General Scarlett.  This led inexorably to the third part of the battle known to history as ‘The Charge of the Light Brigade’.  Amongst those heroes was Private James Charles Purves of the 11th Hussars.

Purves was born at Lennelhill, Coldstream on 7th June 1830 where his father was the tenant farmer.  As James was the youngest son, there was no chance of him taking over the farm and he left home, went to London and joined the cavalry in 1850.

In the afternoon of 25th October, the erroneous order came down from the British Commander-in-Chief Lord Raglan, who with his staff was ensconced on the Sapoune Heights overlooking the battlefield.  The message was supposed to advise the commanders of the Cavalry Division, Lords Lucan and Cardigan, that the Russians be prevented from carrying off some guns they had captured from the Turks earlier in the day.  However the order was misinterpreted to mean capturing Russian guns which had been positioned at the end of the North Valley.  The problem was that whilst Raglan from his high vantage point could see exactly what he himself meant, the cavalry down in the valley could not.  Purves was badly wounded in the Charge and eventually ended up in hospital in Scutari which later would come under the control of Florence Nightingale.  Purves strangely enough was nursed by a girl from Berwick upon Tweed and from his hospital bed sent the following abridged letter to his brother:

You can’t think what “delight I felt in this miserable place to get your most kind letter.  I must tell you of the nature of my wound.  It was canister shot through my left leg which necessitated amputation in the temporary hospital in Balaclava.  I was on the steamer to Scutari for 10 days with nobody in attendance and the rain coming through the decks and saturating you.  My leg is cut off very long about a foot below the knee so I can have a cork leg and having both my arms can earn a good living yet.

The Battle of Balaclava was a disastrous affair for the poor Light Cavalry.  I believe Captain Nolan was sent to reconnoiter the hills on each side (where the Turks had lost some guns to an earlier Russian ‘sortie’).  Whatever report he took to Lord Raglan we know not, as he came back with an order to Lord Lucan for the Light Brigade to charge and take the field guns.  Lord Cardigan then gave the order for the Brigade to advance with the 11th in Second Line.  Off we went tearing towards destruction.  The round shot came first; one most wonderfully came past my shoulder striking my rear rank man right in the chest.  Onwards we went.  I could see the shell bursting over our heads and hear the grape and canister hissing through us.  But I felt or feared nothing – a sort of wildness came over me and I seemed to care not.  Onwards still.  The guns were silenced and the Russians would not stand our charge.  We cut down the gunners and literally took the whole lot.  ‘Hurrah my boys ‘ sung out our brave Colonel Douglas ‘Lets give them another Charge and we’ll take the guns home with us’.  I found myself as excited as possible singing out ‘Come on boys’.  At last someone gave the alarm that a large body of Russian Lancers had formed up to cut of our line of retreat.  ‘We must retire’ said Lord George Paget and so we did.  I had allowed my horse to flag a little when one of the gentlemen came on to attack me with his lance and was making a poke for my back.  I wheeled round in the saddle parried his lance and gave him a second rear point to the left of his right shoulder which I expect will spoil his lancing for some time.  I was quite chuckling to myself when I got a rap on my leg as if from a sledgehammer.  I looked down and saw blood gushing from a good sized hole.  ‘Now then old horse’ I says ‘Save my life now!’  I had seen over the field some Cossacks spiking any of our poor fellows who were down.  I kept the right spur at work and galloped a mile or more when I got quite blind and faint.  I dimly saw a tent chum who helped me and gave me a good drink from his water bottle.  That revived me no end  We then went forward to where the Regiment was forming and old Cardigan was sitting with the tears almost in his eyes when he saw his smart Brigade so cut up.  Our fellows cheered him when he said ‘You must not think men that this is one of my mad-brained actions; I would have given almost anything rather than it had happened.’  I moved forward and asked to be taken to the rear.  I was then hurried off to the doctor who had a lot of our officers and men in a nice green ditch of a vineyard where we could lie up the slope.  I had lost a great deal of blood and one of the officers gave me a good swig of brandy from his flask.  The doctor stopped the bleeding and we had to wait some time for the ambulance which came at last and took us off to hospital and you know the rest.
Give my love to all our family, break this affair very gently to mother and tell her I shall write in a day or two but it is a great exertion.  And now dear brother hoping and trusting that God will allow me to see you all again, believe me your most affectionate brother.”

Unfortunately there were no further letters and Private Purves died in Scutari Hospital in January 1855 from blood poisoning as happened in so many cases of amputations at that time and thus passed a Coldstream hero.

Private Purves’ final resting place in unknown although it is likely to have been close to the hospital in Scutari.  His name however is still remembered on his parent’s gravestone in the old part of Lennel Churchyard.  The headstone has collapsed and it is the intention of the Coldstream and District Local History Society, along with the authorities, to have the headstone lifted and repaired. 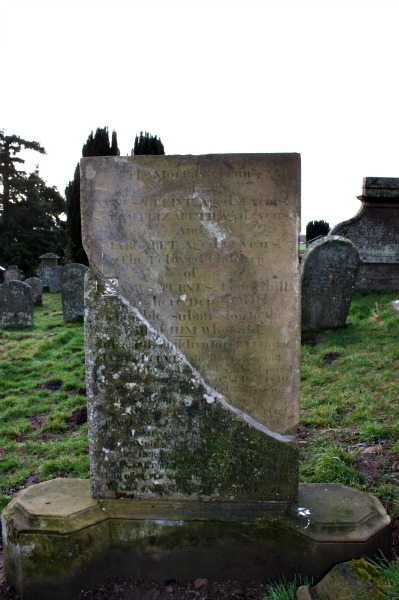 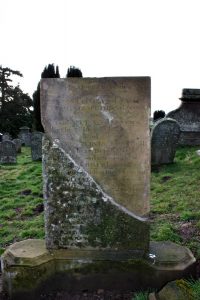 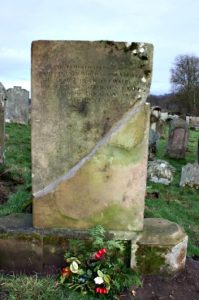 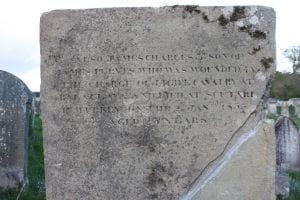