In memory of MARGARET ROBISON PORTEOUS daughter of the REVD JAMES PORTEOUS Coldstream who died at Jedburgh November 1837 aged 4 months. Also ANDREW MATHER PORTEOUS MD his son Assistant Surgeon HM 18th Regt of Foot who died at Colaba Bombay East Indies 10 April 1859 aged 23 years. Where a stone is erected to his memory by his brother officers. Also SARAH GRAHAM PORTEOUS his daughter who died at Coldstream 26 May 1862. Also the above REVD JAMES PORTEOUS who died on 23 August 1865 in his 81st year of his age and in the 55th of his Ministry 25 years of which were exercised in Jedburgh and 29 in Coldstream. Also MARGARET ROBISON his wife who died 16 March 1875 aged 72 years. Also the REVD WILLIAM PORTEOUS his son who died on 22 February 1881 aged 56 years for 30 years Minister of Saint Paul Presbyterian Church of England Spittal in which a tablet is erected to him by the congregation. Also JAMES PORTEOUS Solicitor Coldstream his son who died on 3 July 1916 aged 84 years for twenty three years Provost of Coldstream.

James Porteous was born in Dumfriesshire, he lived at East High Street Coldstream, his occupation a Minister Of The Gospel. His wife Margaret was born at Jedburgh. Son James Porteous was also born at Jedburgh, his occupation a County Councillor, Chief Magistrate of Coldstream and a Solicitor/Bank Agent and Land Agent. In 1891, he was living at Banky  Scotlands? In 1901, he was living at 1 Victoria Street. 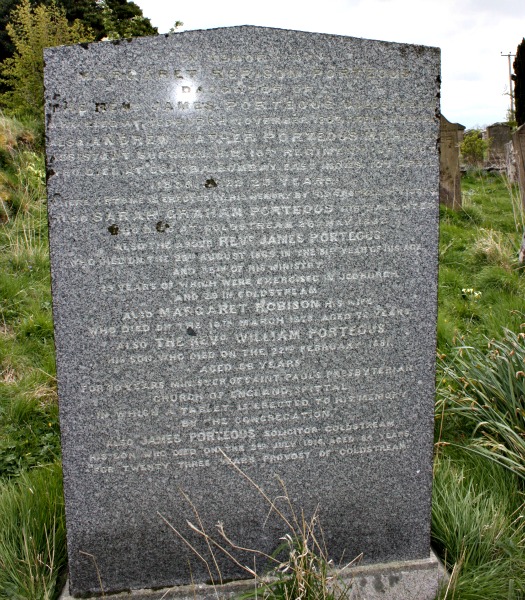 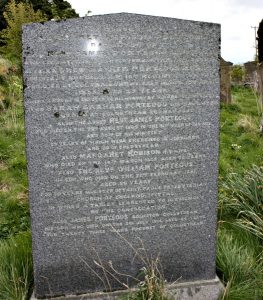 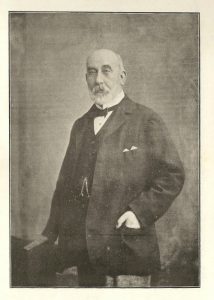