My grandfather John [Jock] Cockburn Bruce spent most of his young life in Berwick and married Rachel Rowland who was from Dalkeith in 1912.  Jock had joined the army as a boy soldier in 1901 and served with the Seaforth Highlanders in Egypt and India.  In 1908 he transferred to the Royal Horse Artillery and served on the Western Front with the RHA from August 1914 until September 1917,  when he returned home to Coldstream badly wounded.

Jock never fully recovered from his wounds, and he worked as a postman in Coldstream.  Jock and Rachael had three children, Jenny born 1913, James born 1920 and Margaret born 1923.

Always the soldier, in 1940 aged 55, Jock was commissioned into the Berwick Home Guard as a lieutenant as served until 1944.

All three children left Coldstream after the war.  Jenny married a Canadian and lived in London, James became a police commander in London with the Met. Margaret left Coldstream in 1946 with her baby son James, to travel to Australia, to meet the parents of Jim Lyon.

Margaret met an Australian while away, and never lived in Coldstream again.  My mother married Pat Mehan, who was a returned Australian soldier in 1950, and she and my father had a very happy life, living in many countries, while my father worked for the Shell Oil Company.

Jock died in May 1946, about three months after Margaret and young James left Coldstream, and my grandmother always said that he died of a broken heart over Margaret and James leaving. Jock had given Margaret and the baby a lot of assistance from the time Jim Lyon was killed and became very close to them both.

My mother Margaret, did go back to Coldstream a number of times, and encouraged all of our family to know of their Scottish family roots.  Whenever she went to back Coldstream, she never went out to Lennel. Having Jim Lyon and her father buried there was too much for her.

All our family spent time in Coldstream, and I lived with my grandmother Rachel for approx 6 months in 1964.  She lived at 3 Leet Street with her identical twin sister Bridget. I had a wonderful time living in Coldstream, going to the local primary school for two terms. As a young boy, I listened for hours to the stories my grandmother told me about the Borders.  She also told me the story of Flodden, it was her version of Flodden, which as I found out later, that the real story of the of the battle was a bit different, her version had the Scot’s actually beating the ‘evil’ English!!

My grandmother’s sister Bridget, married a William Renton, who returned from WW1 a broken man with ‘shell shock’ and he remained invalided until his death in 1945. They had no children.

My grandmother Rachael and Bridget both passed away just months apart in 1974. They are both buried together at Lennel.  After that time my mother never returned Coldstream.

I have been back to Coldstream a couple of times since, the last time in 2005, when I took my daughter who was working in London at the time, to Coldstream, to show her where her grandmother came from.

We went out to Lennel, and there I could give my daughter a family history lesson and at the same time pay our respects to some special people.

Although we all live thousands of kilometres away, Coldstream is still a very important part of the fabric of Margaret’s children. Margaret had eight grandchildren, who all adored her, she was just the best grandmother, and when she died in March 2009, the whole family lost a wonderful mother and grandmother.

During her final days in the hospital, we would all sit around her bed and play her favourite Scottish songs to her, and that was the one thing that always bought smile to her face.

My mother never forgot where she came from, and although our family are ‘Australian’ she never took  Australian nationality, and she was always a ‘wee lassie’ from Coldstream. 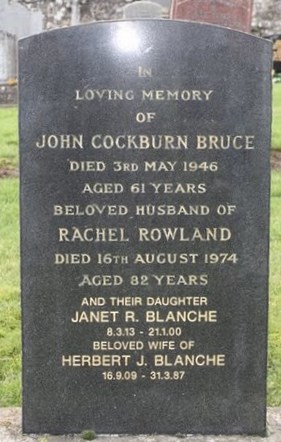 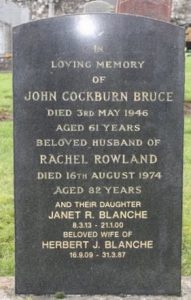