The Society is eternally grateful to Gwen Chessell for this beautiful reflection on our Lennel Kirkyard project:

'High above the River Tweed is a quiet place, where ancient yews stand like green pillars reaching for heaven. This place is approached by a path that winds steeply upwards across a thickly wooded slope. The path leads first to a grassy platform that looks out over the murmuring river below across to the English farmland. A rough seat surrounded by brambles invites contemplation and, when the sun is shining, to some dallying to soak up grateful warmth. But something soon beckons the stranger to move on and wander over a simple stile set into a gap in a stone wall into a silent, sequestered place.

'This is Lennel kirkyard, the resting place for hundreds of years of the folk of this area. It is a peaceful place, its other worldliness only interrupted now and again by the sound of a vehicle moving fast along the road that lies hidden from view on the other side of the opposite stone wall. Even birdsong is muted and respectful. Within this walled place, the air now hangs heavy and seemingly without warmth even when the sun illuminates the obelisks and pillars that mingle among the headstones. The silent, unchronicled stories of those who lie in the chill earth, earth that seems hardly ever touched by the sun’s rays, hang suspended in that heavy air. ‘I was here’, the unspoken air cries out, ‘I lived, I loved, I suffered, I saddened–how can I tell you my story?’

'Around the six feet of soil that hide the remains of the dead, the blurred stone monuments are the only remembrances of their passing; the only tangible hints that the dead lived at all. Perhaps seven hundred years of lives, from the most lowly to the highest in the land, seven hundred years of stories, now forgotten. But even in death, there is inequality. Some of high degree separated themselves from their more lowly brethren by their interment in another enclosure that is wreathed with rose and honeysuckle. But whether of high or low degree, in this, the oldest part of the kirkyard, most of the old graves lie untended; the inscriptions unreadable. Those who mourned each passing, have now passed on themselves and so the mourned become the unmourned.

'And in the centre of the kirkyard is the ancient kirk, now itself decaying just as inevitably. Dark, aged yew trees give shelter to the shattered walls that still watch over the silent congregations.  Unlike them, the kirk is still above the ground but ruinous and dilapidated. The north wall and the western gable stand, roofless but softened by a monstrous festoon of ivy.  On the inside of the shoulder-high wall two monuments cling to the crumbling surface–one of pink granite and the other of white marble, their inscriptions so sharply crisp that they might well have been carved more recently but the two ministers they commemorate have been dead a very long time. The memorials hold locked within them the ghostly hint of sermons preached long ago, words now lost for ever.  Outside this wall is a tall obelisk, crowned by a garlanded urn and with a dedication which is so decayed that only a name and place are faintly discernible (Reverend Adam Thomson of the Free Bible fame).

'The kirk was hewn long ago from a local quarry. Its fallen stones are now green, moss-covered and in the summer, hidden under nettles and other rank plants. The kirk’s benefice was linked to Coldstream Priory. Sir Walter Scott imagined Marmion, that noble villain, coming here, before the fatal day of Flodden. Perhaps he sought a blessing before that day that was to end for him, and for the Scots against whom he fought, so mercilessly unblessed.

'Not all men respected those who had gone before them. At the west end of what was once the nave of the kirk, the existence of a mort-house testifies to those who did not scruple to use human remains as currency.  In the days when anatomists were eager for cadavers to dissect, men kept watch here to keep safe the newly interred bodies of the dead. Now the dark, dank interior of the mort-house is covered by a corrugated iron roof and the only living watcher is the occasional barn owl. Elsewhere iron bound mort-safes are pits for the unwary, sinking and decaying into the ground like their long mortified occupants.

'But new life returns each spring, first when the snowdrops carpet the ground softening one’s awareness of mortality and inevitable decay, followed by the joyful yellow of narcissi.  In summer, the ground is covered by clover, vetch, nettles, blue geraniums, brambles and thistles. Insects hum and butterflies flit among the flowers.  Not far from the kirk, another obelisk is obscured by four gigantic yews but through the yews, a determined rose has inserted itself and its orange-red hips hang brightly and defiantly against the blue-black berries of a bird-seeded mahonia.  The interlopers are a welcome foil to the sombre green of the yew trees. The kirkyard gives its shelter to this day as burials still take place in the newer eastern end, and its existence continues to offer comfort and a place of contemplation to the newly bereaved. In this newer end of the kirkyard, lies a former prime minister, safely gathered in the soil of the country he loved best. This is still a place where the lives are celebrated, honoured and commemorated; the bereaved visit and remember. Life goes on.' 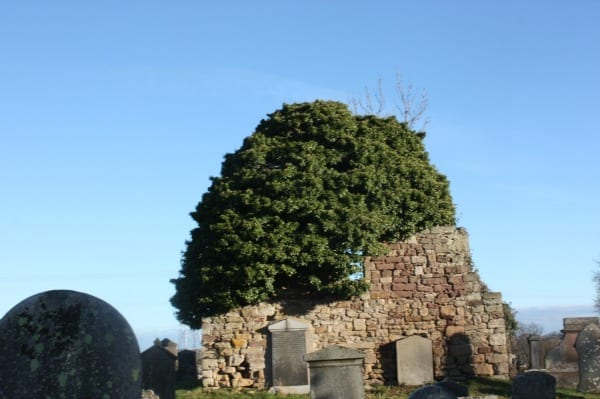 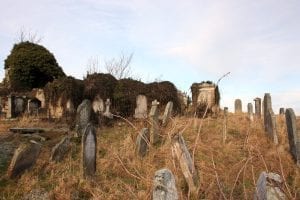 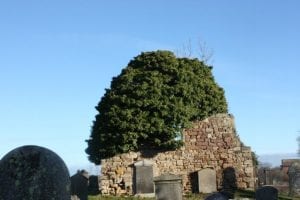